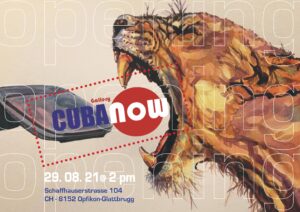 Dear media professionals
With pleasure we, 3 cultural workers: Andi Schnelli, Kirstine Ahumada Torres Meyer and Orlando Borrell,
you in our new gallery and house of encounter, to a
Press apero, on August 25 at 2 pm, welcome.
In Opfikon, near Glattbrugg, on the so-called 'Balkan mile', we will open on the
August 29, 2021 at 2 pm, the gates of a 260m2 exhibition space, called 'CubaNow'.
The opening is supposed to be spectacular!
We show art exhibitions framed with performance, music and fine mezzes from Lebanon.
All three of us are specialized in Cuba, but we leave nothing and nobody out.
Orlando Borrell tells: Since there is also in Cuba. Havana, there is a Chinatown and this small island is a hodgepodge of
Ethnicities and cultures, we connect, network and represent visual and performing arts from all over the world.
The team:
Founder of CubaNow:
Orlando Borrell, native Cuban, in Switzerland for 20 years, operator of the mediation agency 'Ashee' and the
Haus der Begegnung CubaNow', had at that time, as the first Cuban gallery owner in Zurich, the
Galeria Adriana' with art from Cuba, opened. Among other things, he organizes at the Zunfthaus Zurich, musical, artistic and
culinary events that immerse us in the magical world of the Caribbean.
Co-founder:
Andi Schnelli, Swiss, architect and gallery owner runs a gallery in the beautiful old town of
Lucerne, the löwengalerie.ch. He is the founder of the Cuban art platform artecuba.ch, as well as
successful art and culture traveler and collector and specialized in Cuba and Latin America.
Co-founder:
Kirstine Ahumada Torres Meyer, Swiss, publisher, photographer, art and culture creator of
cultura.curieux.ch with the slogan ' Culture has to be loud', is in the artistic direction of the
Gallery 'CubaNow' operates and brings together art of all genres from Cuba and around the world virtual and real.
Our philosophy is that despite restrictions of the Corona Pandemic, as well as revolutions that occur in the
The aim of the project is to raise awareness of the fundamental importance of art and culture and to ensure that they remain self-sufficient.
Creation and expression is paramount and as the Cubans say: 'Viva el arte!'
At the opening, part of the premises, will be dedicated to the art exhibition of Andi Schnelli, artecuba.ch.
Young Cuban art with the theme 'Cubanisado', 20 young artists are represented by him.
He has met all the artists personally on his numerous trips to Cuba. Regularly, for almost 25 years, invites
Andi 'Artists in Residence', to Switzerland to engage in an on-site artistic creative dialogue and
to establish personal contact, which is excitingly reflected in the exhibition....
Kirstine Ahumada Torres Meyer of cultura.curieux, presents with the theme.
'Social Code' ca 10 artists from Cuba, Switzerland, Italy, Thailand, Spain, Africa and Argentina.
Modern, exciting and exciting pieces are shown, which let the viewer fly in his or her mind.
Orlando Borrell, ashee and cubanow.ch, is host and coordinator and peppers events, of the House of Encounter, with
music, cuisine, Cuban charm and joie de vivre.
We look forward to welcoming you.
If you come to the press apero on August 25 at 2 pm
please send me an e-mail for confirmation,
an:
kirilu@bluewin.ch.
Thank you and have a pleasant week.
Your CubaNow Team
Hasta Luego!
Orlando Borrell
Kirstine Ahumada Torres Meyer
Andi Schnelli